In 2015, American Pharoah became the first horse to win the American Triple Crown since Affirmed back in 1978. He is only the twelfth horse to accomplish the feat and has certainly earned his place among the all-time greats, although probably not in the top five.

There are so many factors which go into making a Champion racehorse, whether it is the brilliance of a horse like Secretariat or the sheer will to win of Affirmed. Man O’War would be on most people’s short-list for his consistency and versatility while both Seattle Slew and Spectacular Bid captured the public’s imagination in their quest for Triple Crown glory.

It is difficult to leave out Citation and Native Dancer while the more recent exploits of Cigar, John Henry and Zenyatta are all worthy of a mention. The final choice of five is therefore made on a combination of many factors including popularity.

Racing fans remember great races, usually involving duals or thrilling photo-finishes. For sheer destructive power, the record breaking 31-length victory of Secretariat in the 1973 Belmont Stakes will always be remembered as one of the finest individual performances of all time.

Secretariat was by Bold Ruler out of Somethingroyal, by Princequillo and was foaled at The Meadow in Caroline County, Virginia. He was a large chestnut colt owned by Penny Chenery and trained by Lucien Laurin.

He finished fourth on his racecourse debut at Aqueduct Racetrack in 1972 before winning his next five races. He passed eight horses to win the Hopeful Stakes at Saratoga but was disqualified for interference after winning the Champagne Stakes at Belmont. Secretariat established himself as the top two-year-old with an eight-length victory the Laurel Futurity. 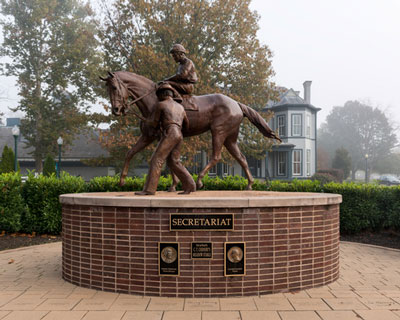 He began his three-year-old career with two wins but suffered a setback when only third to stable companion Angle Light and Sham in the Wood Memorial. He bounced back to win the Kentucky Derby by 21⁄2 lengths from Sham with Our Native eight lengths further back in third. He set a new track record in the process and was the first horse to break the two-minute barrier in the race.

He defeated Sham by the same margin in the Preakness, his winning time eventually being acknowledged as a new race record after a special meeting of the Maryland Racing Commission. He would face only four runners in the Belmont and was regarded as a racing certainty with a huge crowd turning out to see history in the making.

Secretariat treated them to a breath-taking performance, beating off the attentions of Sham with six furlongs to travel before stretching further and further clear with every stride. His 31 length winning margin shattered the previous best set by Count Fleet in 1943 and he recorded the fastest ever 1 1/2 miles on dirt of 2:24 flat.


Secretariat won 16 of his 21 career races with total earnings of $1.3million. He was retired at the end of his three-year-old season and went on to sire the winners of 57 stakes races.

Man O'War suffered only one defeat in 22 races and established records at five different distances. He was sired by Fair Play out of Mahubah by UK Triple Crown winner Rock Sand at Nursery Stud near Lexington, Kentucky. He was bred by August Belmont Jr. and sold on to Samuel D. Riddle to be trained by Louis Feustel.

Man O’War won on his debut at Belmont Park in 1919 by six lengths and went on to win nine of his ten races as a juvenile. His only defeat was controversial as he was facing the wrong way when the runners were allowed to go.

The Triple Crown did not then have the same significance that it holds today so Man O’War was not even entered for the Kentucky Derby. He set a new track record in the both the Preakness Stakes the Belmont Stakes with his other victories including the Dwyer Stakes, the Travers Stakes and the Stuyvesant Handicap.


He was regarded as invincible and beat lone rival Hoodwink by 100 lengths in the Lawrence Realization Stakes, smashing the track record by six seconds. Man O' War was retired to stud at Lexington, Kentucky and would also become one of the most influential stallions in the history of the sport.
He sired more than 64 stakes winners including 1937 Triple Crown winner War Admiral. His legacy continues to this day with his name appearing numerous times in the bloodline of 2015 Triple Crown winner American Pharoah.

Affirmed won the affection of racing fans for famous rivalry with Aldyar in the Triple Crown races in 1978.

Affirmed was a chestnut bred by Louis E Wolfson at Harbor View Farm in Florida, a son of Exclusive Native out of Won’t Tell You by Crafty Admiral. He was trained by Laz Barrera and will always be associated with teenage jockey sensation Steve Cauthen.


Affirmed won seven of his nine starts as a two-year-old, beginning his great rivalry with Alydar. He defeated the Calumet Farm colt in four of their six meetings as a juvenile and was named 1977 American Champion Two-Year-Old Colt.

The first of three epic encounters between Affirmed and Alydar took place in the Kentucky Derby with Cauthen making an early bid for home. Alydar was held up off the pace and ran on late to finish a length and a half away in second.

In the Preakness Stakes, Cauthen sent Affirmed straight to the front with Alydar throwing down his challenge on the far turn. Affirmed refused to surrender the lead, battling all the way to the line to win by a neck.

The scene was set for a final showdown in the Belmont as Affirmed set off in search of the Triple Crown with Alydar stalking him from almost a mile from the finish. Cauthen set a steady pace over the testing mile and a half but Alydar poked his nose in front half-way up the home straight. Affirmed simply refused to be denied and forced his way back up on the line under a strong left-hand drive.

The two great rivals would meet for one final time in the Travers Stakes at Saratoga but Cauthen missed the ride through injury. Laffit Pincay substituted and drove Affirmed home in front only to be disqualified for interference on the far turn.

Affirmed raced on at four, winning the Strub Stakes before beating Exceller in the Santa Anita Handicap. He then won the Californian Stakes at Hollywood Park and the Hollywood Gold Cup. Victory in the Woodward Stakes at Belmont Park followed before beating Spectacular Bid in the Jockey Club Gold Cup.

Affirmed was syndicated for a record $14.4 million and sired over 80 stakes winners.

1977 Triple Crown winner Seattle Slew was bred by Ben S. Castleman near Lexington, Kentucky. He was sired by Bold Reasoning out of My Charmer by Poker.
He made his debut at Belmont Park in 1976 where he won by five lengths. He followed up in an allowance race allowance before winning the Champagne Stakes by nearly ten lengths, securing his place as Champion two-year-old of 1976.
He started his Churchill Downs build-up by setting a new track record at Hialeah Park Race Track before winning the Flamingo Stakes by four lengths. He then won the Wood Memorial Stakes and was made odds-on favourite for the Kentucky Derby.

He recovered quickly from an awkward start and pulled away in the stretch to beat Run Dusty Run by a length and three-quarters. He then defeated Iron Constitution by a length and a half in the Preakness and completed the Triple Crown in the Belmont with a comfortable four lengths victory. 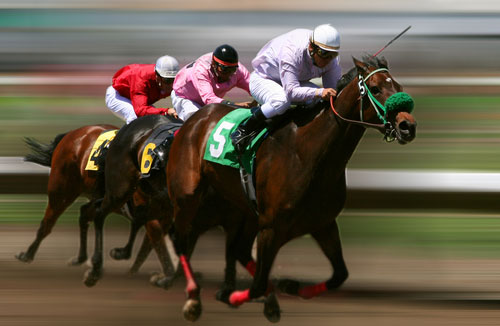 He was beaten for the first time in the Swaps Stakes at Hollywood Park and was then side-lined for nearly 12 months by illness and injury. He returned in triumph with an eight-and-a-half length win at Aqueduct. He was then beat 1978 Triple Crown winner Affirmed by three lengths in the Marlboro Cup in a time less than half a second off the track record set by Secretariat.

Seattle Slew also won the Woodward Stakes but paid the price of a setting a furious early pace in the Jockey Club Gold Cup and was beaten a nose by Exceller. He retired on a winning note in the Stuyvesant Handicap at Aqueduct with a three and a half-length success.
Seattle Slew won 14 of his seventeen races with earnings in excess of $1.2million. He was the leading sire of 1984 with Kentucky Derby and Belmont winner Swale and his progeny also included Slew O’Gold and AP Indy.

Spectacular Bid’s defeat in the Belmont Stakes denied him the Triple Crown but his brilliant campaign as a four-year-old entitles him to his place in the top five.

Spectacular Bid was bred at Buck Pond Farm near Lexington, Kentucky by Mrs William Hilmore and her daughter Madelyn Jason. He was by Bold Bidder out of Spectacular by Promised Land and purchased at Keeneland Sales by Harry and Teresa Meyerhoff of Hawksworth Farm in 1977 to be trained by Grover G. “Bud” Delp. 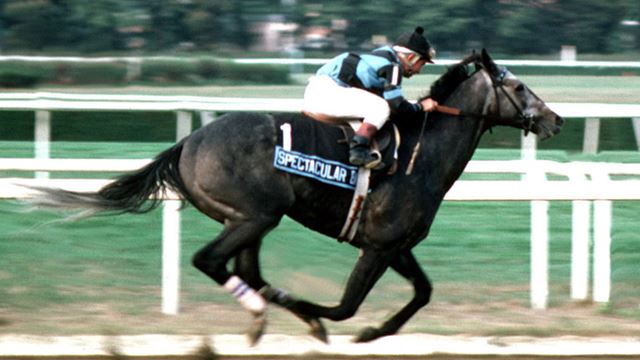 Spectacular Bid made a winning debut at Pimlico the following year and later added the Grade 1 Champagne Stakes and the Grade 1 Laurel Futurity to end the season as America’s top juvenile.

Spectacular Bid won his first five starts the following season including the Florida Derby and the Blue Grass Stakes. He started odds-on favourite for the Kentucky Derby and ran out a comfortable two and three-quarter length winner from Golden Assembly under a confident ride from Ronnie Franklin.
He was even more impressive in the Preakness, beating Golden Act by five and a half lengths in a time faster than that recorded by either Seattle Slew or Affirmed. The Triple Crown seemed to be his for the taking but, on the morning of the Belmont Stakes, a safety pin became embedded in his hoof and caused an infection.

Connections decided that the horse was showing no signs of lameness and he was allowed to run. Franklin sent Spectacular Bid to the front before half way but was passed on the run-in by Coastal and dropped back to third at the line. Franklin was widely criticised for making too much use of the horse and lost the ride to Bill Shoemaker.

Spectacular Bid returned to win by 17 lengths at Delaware Park before gaining his revenge on Coastal in the Marlboro Cup at Belmont Park. He finished runner-up to 1978 Triple Crown winner Affirmed in the Jockey Club Cup but that was to be his last defeat.

He won all nine races at four, setting four further track records in the process. His victories included the Strub Stakes, the Santa Anita Handicap and the Californian Stakes. He won the Washington Park Handicap at Arlington Park by ten lengths before taking the Monmouth Handicap.

Spectacular Bid won 26 of his 30 races and earned more than $2.7million in prize money. He was retired to stud at Claiborne Farm in Kentucky and sired the winners of 47 stakes races.

The Nine Best Fantasy Sports Websites You Have to Check Out

I'm a highly motivated, performance driven gambling industry professional, with extensive knowledge and expertise in US sportsbook, casino and DFS products. I take special interest in horse racing and love hunting for the best VIP loyalty programs around.